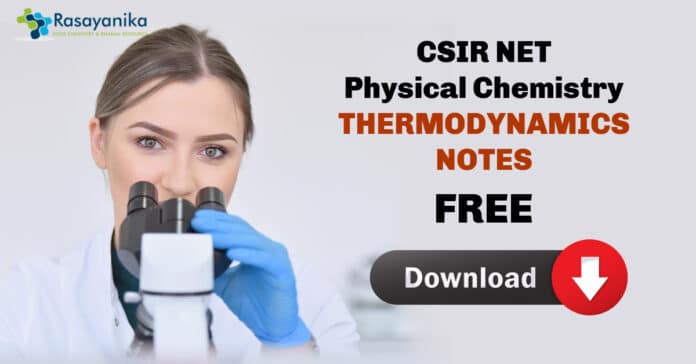 CSIR NET Chemical science exam is conducted twice a year by NTA & CSIR HRDG. Due to the COVID pandemic, it’s a little out of the regular schedule; from next year, it should be back on track. The upcoming CSIR NET exam is scheduled to be conducted in September. Rasayanika is here with some CSIR NET Chemical science notes that will help you in revision for the upcoming year and also will help you prepare for the Next CSIR NET chemical science exam. Below you can download full notes on The Topic – CSIR NET Physical Chemistry – Thermodynamics.

TOPICS COVERED IN The NOTES :

Thermodynamics studies the effects of work, heat, and energy on a system. It is only concerned with macroscopic (large-scale) changes and observations.

To study thermodynamics few basic concepts have to be known. Those are as follows,

Reversible process: A reversible process is a process whose direction can be reversed to return the system to its original state by inducing infinitesimal changes to some property of the system’s surroundings.

11) Thermodynamic equilibrium: It is a state in which no change in the thermodynamic variable is observed.

Ex: If two systems are independently in thermal equilibrium with a third system, they will also be in equilibrium.

The thermometer’s calibration is mainly based on the Zeroth law of thermodynamics.

Overall the two objects at different temperatures in thermal contact tend to move towards the same temperature.

The First law of thermodynamics:

It is an extension of the law of energy conservation, which states that energy can neither be created nor destroyed, although it can be converted from one form to another.

For a thermodynamic process without the transfer of matter, the change in the internal energy of a system is equal to the heat added to the system minus the work done by the system. The beauty of this law lies in the fact that both Q & W are path functions, but change is internal energy is a state function.

Q = Heat added to the system

W = Work done by the system

We can have an idea about some process terminologies from here.

ΔU = q (This relation is true for the isochoric process)

ΔU = w (This relation is true for adiabatic process)

q = -w (This relation is true for isothermal and cyclic processes)

So, the processes are –

Heat Engine is a machine that converts heat energy into work. But all the engines that we see around us cannot have 100% efficiency.

Sadi Carnot proposed : The Carnot cycle which has the highest efficiency possible for an engine.

Based on this carnot cycle, a hypothetical ideal model of heat engine is formed known as Carnot’s Engine

FILL UP THE FORM BELOW:

Published by Pharma Jobs
Tell us something about yourself.
Get Connected!
Come and join Pharma Community. Expand your network in Pharma!
Join Pharma Media!